The Baconweed Fairy is a boss that spawns during Old Jaarnal's quest Three Wishes in Crashlands. She is located west of Graam's Laboratory on an island in the Savannah. You will find a square shaped lake which has Flatstone and a potted baconweed plant. You will be asked to go to the direction the plant is facing. 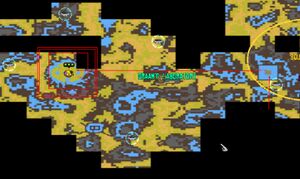 The Baconweed Fairy uses a ground pound attack and will cast flying teeth that follow the player like missiles and sometimes instantly dive to explode on the ground. She will occasionally take a Bacon Nap, which heals her for a small amount. This can be interrupted by dealing damage to her.

In the second phase, the Baconweed Fairy will also cast blue orbs in a hail of bullets, that explode after a short period of time.